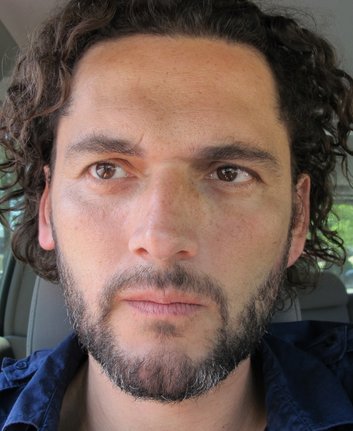 Zoran Luka Fred was born in 1968, on Balkan, where he grew up and and studied in Belgrade. Since 1992 he lives in Scandinavia, and now resides in Helsingborg (since 2013).
In his early childhood, he used to spend entire summer holidays in the mountains of Durmitor where he used to help his uncle, who was a folkloristic wood artist and through whom Zoran was given his first interest and knowledge in shapes, forms and use of tools.
After moving to Denmark in 1992, while studying at Ranum Art School from 1994-96, his wild temperament, a mind full of ideas, craving for nature, made him decide to move far away into the countryside. Here in Northwestern Jutland, between the Limfjord and the North Sea, he found Kirsten Kjærs Museum: and in this inspiring environment he discovered the core of his own artistic expression.
Zoran Luka's main artistic field is sculpture. Materials comprise bronze, iron and aluminum as well as wood and stone. Zoran also works with other media such as video-projection and 3D print and land-art.
Zoran learned the craft of bronze casting with sculptor Pàl Lakatos in Kecskemet 1998-2000. Following this, he established a foundry and metal art workshop at Kirsten Kjærs Museum, from where he teaches sculpture and bronze casting, organises art workshops, and assists resident artists in accomplishing their works. Zoran also holds an annual master-class in bronze casting in Orient, Long Island, USA.